Table Tennis is a growing sport at Newington supported by professional coaches. 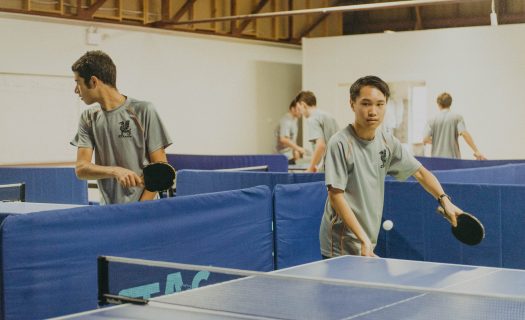 Table Tennis has been played over many years at Newington. Although not an official AAGPS Sport, Table Tennis is growing in popularity and we encourage all players to participate in competitions between schools.

The Concordia Centre across the road from the Stanmore Campus is the home of Table Tennis at Newington housing 14 tables and a coaching robot.

Boys participate in three 90 minute training sessions per week in Terms 1 and 4.

Our competition teams over the season continued their dominance of the six schools competing again confirming Newington College as the overall best performing school.

It was with great pleasure that we welcomed our senior coach, Mr Guy Fainbloom, back to the Concordia Table Tennis Centre for another season. As the Junior Coaching Director with Table Tennis NSW, his expertise and experience have been central to the development of our program at Newington. With the departure of a talented group of Year 12 students last year, this season Guy focused on both building the skill set of the new players and improving the match play of the competition team.

For many of the new recruits, the focus on accuracy and consistency in many of the training drills was quite challenging. However, as the season progressed, they found themselves able to stay in the rallies longer and maintain pressure on their opponent in order to win the point. Saturday competition was once again held at the NSW Table Tennis venue at Sydney Olympic Park.

Early on it was evident from the results that the opposition was going to be tough to beat. Our coach began to focus on matchplay and we introduced an extra competition squad training session on Wednesday each week, designed to improve the tactical approach to the players’ games as well as their mental resilience.

Newington finished fourth for the 2019–2020 season, which saw King’s defeat Knox by one game to take the trophy. It was a very enjoyable season and, as the new director, I would like to particularly thank Coach Fainbloom, Ms Julia Gonzalez and new coach Miss Linting Chen for their efforts this year.