Starting from humble beginnings in 1968, football is now the most popular sport in the College, with almost 520 boys being coached twice a week, all part of our 38 individual graded teams from Year 7 to Opens.

Our player development-centred approach, continuous professional development for coaches and the diversity of the program all coalesce to make Newington football the perfect place to live your football dream. 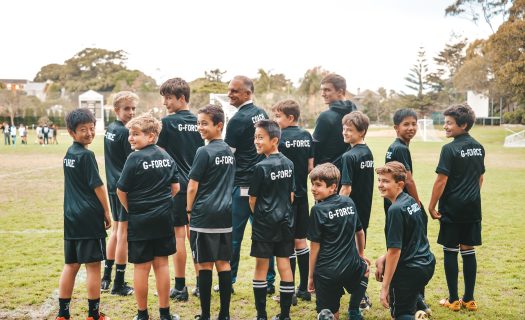 The Football program aims to develop the boys’ interest in and passion for football and, in so doing, improve their technical and tactical ability through fun physical activity and social interaction.

The emergence of the COVID-19 variant in late June signalled a dramatic end to the 2021 football season after only three rounds of the premiership. The year started with high hopes and rich promise as the extended Senior squad of almost 60 boys from Years 9 to 12 began technical sessions at Fraser Park at 6.30am, with our young goalkeepers commencing at 6.15am under the tutelage of Mr Michael van Walsum and Mr Tom Petsianis.

The boys were exposed to passing, technical, tactical, conditioning and competitive exercises and games which are global in nature, from international football to European professional football to the best in academy development around the world, all under our unique range of top-quality UEFA ‘A’ license coaches Mr Brian Baker, Mr Neil Jablonski, Mr Terry Palapanis, Mr Nefta Gonzalez and Mr Valerio Silvestro. Any boy willing to present himself consistently at every development opportunity progressed beyond measure. Irrespective of what level of NPL football a boy plays, embracing the Newington Football program adds even more weight to their stature in football, and especially at Newington College.

Year 7 Football began in brilliant style as our enthusiastic cadre of Old Boy coaches delivered a wonderful rotation of skill games, technical challenges, mini competitions and equipment centric control assessment. The icing on the cake was the giant sausage sizzle hosted by our Newington College Football Association (NCFA) parent group. In terms of ‘capturing hearts and minds’, the entire event was a tour de force, which our young boys enjoyed.

The main program was in full flourish by the end of March with Year 8, 9, 10 and Open sessions in Arlington, Fraser Park, Lambert Park and Buchanan. This year also marked a watershed moment as outdoor futsal in the Fraser Park mini cages was rolled out for the 14F, 14G and 14H groups under the direction of Mr Brian Baker and Mr Tom Petsianis. The feedback from the boys and coaches was rapturous. Futsal as a summer sport is increasingly on the horizon. A world cup was held every Wednesday and every boy enjoyed the experience and improved significantly, such is the enhanced development that takes place in small areas, affording all boys multiple touches and interventions.

Despite the turbulence that COVID-19 wrought, 2021 was an historic year. The first floodlit GPS games took place on a still night at Fraser Park with both 1sts and 2nds winning convincingly against Sydney Boys High in the first round of the Plate competition. Thanks to the wonderful co-operation of the grounds staff and the support of the Sports department, Buchanan Ovals were reconstructed with the main oval receiving an extra 12 metres width and the NCFA assisted with the purchase of high-quality, full-sized, portable goals. Although Newington had only one GPS premiership home game on the new surface, the increased space led to 9−1 and 5−0 wins for 1sts and 2nds. Newington teams from now on will have a decided home advantage on the new playing surface. This meant a smaller Buchanan Two, but this is a better fit for younger boys to improve their skill and control in tight spaces.

Another initiative (again with assistance from our maintenance staff) was the installation of a large whiteboard and movable plasma screen in the equipment room, which has a dual purpose. On match days, teams were brought into the presentation room for tactical demonstrations, videos and keynote graphics. As well, head coaches brought their age group coaches together to go through the ensuing session, emphasising the key factors and progressions in each exercise and game. At Newington, unlike many schools, we see football as a learned set of skills, in the same manner that algebra is delivered on a phased and progressive basis. We see the boys’ development as a transformational process, not transactional. Our coaches were also equipped with the new Sports Session Planner software to design their own exercises and animate them, and professional development classes were held via Zoom.

The Newington Football program has a complete bespoke development program, via booklet and download, for all ages and levels through to Years 3 and 4 in Wyvern and Lindfield. Animated sessions and tactical meetings took place during lunch times, and the 14As had an exciting year of football growth as Mr Scardilli introduced video analysis sessions. The further expansion of the school’s Veo camera system provided match footage of six to eight matches weekly posted on Spaces by our dedicated football administrators, Mr Summers and Mr Scardilli.

The Newington Football program really does strive to ‘discover what’s possible’. Hopefully our present students and future generations will absorb and embody our ethos for the betterment of their teams and for their own self-worth.

Director of Football Mr B McCarthy

The Newington College Football Program has established a dynamic, consistent, challenging, progressive, modern and player-centred development pathway for all boys irrespective of their current level of football ability or previous history playing the game.

The boys have access to high-level skill development coaches, whose technical knowledge is outstanding. The program offers a variety of content tailored to different levels, which is crucial to each boy’s enjoyment and competency building. We take a very careful, planned approach to all teams within each year group, with our Year Co-ordinators selecting bespoke content for each team in tandem with the coaches, meeting with the coaches in a presentation-style setting and monitoring the boys’ performances on a weekly basis to allocate each student to a team based on merit.

It is this meticulous, systematic methodology that has served Newington boys well in recent years and has led to an average 70 per cent win rate, with less than 20 per cent losses. We strive to improve boys individually and the team collectively, with high standards that benefit all boys.

To assist the boys on their football journey, we record a number of games via our new artificial intelligence Veo camera system and employ session design software, performance analysis software and telestration packages. Football conditioning and power training are also available.

A number of Old Boys have progressed to A League, NPL football and American Colleges, and many of our boys also transition to coach in the Football Program when they have finished school.

No stone is left unturned, at Newington, to provide each boy with the opportunity to discover football, like football, engage in football and ultimately love football. When a boy reaches that stage, their mindset for self-improvement ultimately impels them to persevere, practice and play, every day.