Newington College was the first school to play rugby back in 1869 with a twenty-a-side game against Sydney University on Newington’s home ground at Silverwater.

Today the tradition of rugby at Newington remains strong. Boys of all ages and skill levels are invited to play and numbers are not limited. Under the guidance of a full-time coaching director, boys are required to train two afternoons a week and have access to excellent facilities including three rugby fields, a weights room for strength and conditioning training and a 25-metre indoor pool for recovery sessions. 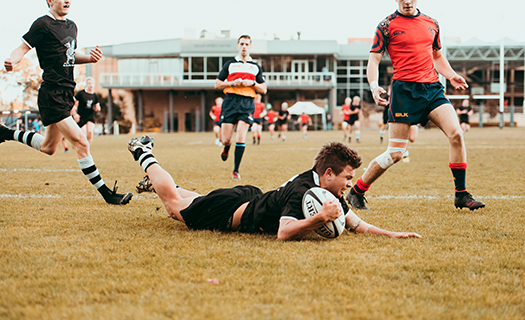 Competition involves home and away fixtures against other AAGPS schools which are played on Saturdays during term. There are also opportunities to tour domestically and overseas.

In 2015 the school’s U14’s toured the UK following the Wallabies at the Rugby World Cup and in 2016 the 1st XV embarked on a pre-season tour of japan and the U15s tour Tonga annually in conjunction with the Service Learning Department.

It goes without saying that the 2020 season was like no other and hopefully another like it will not be seen again. However, with this challenge came a need to adapt and focus on the important aspects of our sport. This season saw a significant increase in boys contributing around the ground not just as a rugby player but on the scoreboard, along the touchline, being a ball boy, behind the video camera and, most significantly, being a referee. Building this element of club support up and down the ages makes the group stronger and all boys are commended for their community actions this season.

Although we only contested in eight weekends of rugby, with only three home games, the support from the Newington College Rugby Support Group was significant and appreciated across the entire depth of the program from Lindfield and Wyvern to Stanmore and we thank all involved for this contribution.

2020 once again provided a momentous milestone of the history of both our school and the game of rugby in Australia with the celebration of the 150th year of AAGPS schoolboy rugby being played in this country. Our competition game against The King’s School on the Johnson Oval this season was the anniversary of this milestone. Unfortunately, the ‘Back to Newington Day’ fanfare could not accompany this event, but the outcome of the day, from the replica jersey, the aesthetics of the grounds, the presentations after the 1st XV fixture and the live streaming production was undoubtedly the highlight of the season and a testament to all involved in making that day come to fruition.

From a performance outcome, our on-field results dropped from the previous year due to the adjustment of gradings forced upon us and the requirement to alter the draw to enable fixtures to be played this season. This positioned a large majority of our teams in levels they had previously not contested in. Although the results from a winning percentage were not as encouraging as the previous year and reflected the draw adjustments, the impact from increasing the level in which our boys competed aided their rate of development. Many long-term plans and actions were established this season as a result of the unique year with the objective of sustainable gains for the future.

The success of our teams was built upon a solid foundation of hard work and belief in one another.